Posted at 10:20h in News, Non classé by webmaster@telecentre-europe.org 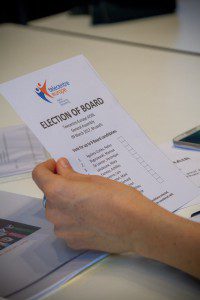 On March 9, 2017, the Telecentre Europe General Assembly (TEGA) was held in Brussels. 35 Telecentre Europe member organisations were represented to review, discuss and vote on the approval of the last year’s activity report and accounts as well as the workplan and budget for 2017. Among the important agenda topics was also the election of the new board for the next two years.

Because of the growing number of member organisations, about which we are very excited, it was decided to increase the number of Board members from seven to nine to better serve the needs of the Telecentre Europe network. Before the meeting in Brussels, all TE members could get acquainted with the candidates’ bios; and at the General Assembly the candidates had to do a one-minute pitch to attract the voters.

As a result of the voting, four of the previous Board members were re-elected, and five new members joined the Board to govern Telecentre Europe for the next two years. Mara Jakobsone and Pedro Aguilera Cortes were re-elected to be the Chair and Deputy Chair of the Board; and each Board member will also take on specific responsibilities based on their expertise and interest. 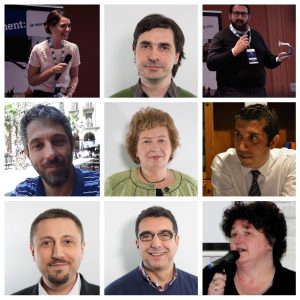 Telecentre Europe would like to thank the previous Board members for their contribution to the development of the organization. Each Board member received a Letter of Appreciation for their service from Telecentre Europe. Special thanks go to Gerhard Seiler from 21 Century Competence Centre (Germany) and Rodrigo Zardoya from Dedalo Foundation (Spain) for their time and effort in making the organization stronger and more sustainable. They are no longer part of the Board, but we hope very much they will still be active members and supporters of the network in other roles.

We wish our new Board members perseverance, new ideas, and inspiration to lead the organization to new achievements and success!

New Board Elected at General Assembly

New Board To Be Elected in February 2015