17 Feb Social Innovation is now, more than ever, digital

Posted at 11:34h in Employability and Entrepreneurship, News by Andrea Bedorin

Digital Social Innovation refers to the growing movement of tech entrepreneurs and innovators operating for the benefit of the civil society and who develop digital solutions to social challenges. 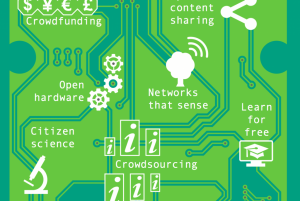 The European Commission hosted today, 17 Feb 2015, an interesting conference on the topic of Digital Social Innovation (DSI), a complex and engaging concept that was recently the object of an EU funded research project. As defined by the project leaders, Digital Social Innovation is a “type of collaborative innovation in which innovators, users and communities co-create knowledge and solutions for a wide range of social needs exploiting the network effect of the Internet.” (Note: For an engaging video summary of the concept, just scroll down this post.)

One of the (unresolved) discussion points from the event’s first panel was whether Digital Social Innovation is an aim in itself or is rather a subset of (and therefore at the service of) social innovation. Other  much debated topics at the event included the likely future scenarios for Internet and Digital Technologies in Europe. Will there be a true ‘Power to the people’ approach with technologies empowering people by connecting and providing infrastructure? Or will the ‘Big Brother’ scenario prevail where powerful companies gather data and use it exclusively for their own interest ? The underlying key question that emerged was whether innovation and citizen empowerment could coexist alongside notions of control and surveillance.

For Telecentre Europe it is clear that the future of telecentres is closely tied to the concept of digital social innovation. The more telecentres, access points, living labs, co-working spaces, libraries and other publicly funded spaces become open to innovation and collaboration, the more innovation we will see from ordinary citizens. As we have already stated in the post in January,  the role of schools and non-formal learning spaces cannot be ignored when we talk about innovation.

Some of our members such as the Spanish Association of Community Telecentre Networks views the future of telecentres as becoming Social Living Labs rather than (only) centres providing access, learning and training. Not everyone may agree with this direction for telecentres as different contexts in various EU countries yield different roles. However, social innovation is clearly an integral part of what telecenters are already about and putting a highlight on this aspect in the future will certainly be beneficial.

We invite all our members and interested grassroots organisations to join the DSI and make sure they figure on the Map of digital social innovation that you can find here:  www.digitalsocial.eu. The map already shows 1000 organisations active in more than 600 collaborative DSI projects that span from areas such as education, democracy or economy to science and technology.