01 Oct Lessons to Be Learnt From the Nordics

Posted at 12:30h in Employability and Entrepreneurship, News by Andrea Bedorin

New Commission is planning to put policies at the centre of agenda for growth and jobs to move faster towards digital economy. What are Norwegian and Belgian perspectives on this? How do they see the role of ICT to foster new jobs and economic growth? The Mission of Norway to the EU, the Norwegian Embassy, Fedict (ICT federal public services in Belgium) and IKT-Norge organised a seminar on ICT for Growth and Jobs on 17th September in Norway House in Brussels. 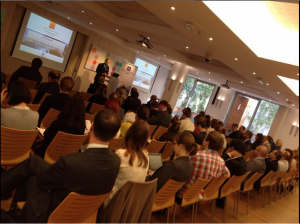 Photo: The Mission of Norway to the EU on official Twitter channel

Norwegian ambassador Niels Engelschiøn in his welcoming speech pointed out that if we do not have a functioning digital single market, we will be missing out on growth, jobs and scaling up. Mr. Engelschiøn addressed a number of obstacles that hinder creating the digital single market: (1) a cross-border access to online services and content, (2) cross-border commerce which is currently too slow and the target is 20% of EU population, (3) obstacles for SMEs to operate across the borders, (4) portability of content (transferring it from one platform to another), (5) differences in standards, such as mobile payments. Therefore, a comprehensive approach is needed instead of doing things in piecemeal.

How Norwegian companies do it?

Norway including other Nordic countries produces more services than products which results in higher labour costs compared to the rest of Europe. That is why Norwegian companies look for other ways to stay competitive. Toril Nag who works in Lyse, the leading Energy and Telecommunications Company in Norway, believes that infrastructure is the backbone and digital infrastructure today is more important than road infrastructure. Demographical changes have also contributed to adapting business offering: for instance, aging population demands better (digital) services, like smart home system which is one of the new products Lyse provides.

On the other hand, Nils Vold from Visma Enterprise Solutions suggests that SMEs services should be made available “all the time”. With around 75% of mobile penetration in Europe, customers expect accessibility 24/7.

National movement to teach kids coding in Norway is widespread. Torgeir Waterhouse who works with IKT-Norge, is one of the founders of this movement and believes that coding helps kids to be creative and create. The volunteering movement supports schools in teaching informatics and trains teachers. According to T. Waterhouse, kids like to learn from their older peers, so the movement runs training programmes to prepare young trainers to teach – and they get a legal salary to do this. When asked about gender issue in coding, T. Waterhouse explained that they teach around 60% of boys and 40% of girls, so the gender gap is not so prominent. He does not see gender inequality in teaching as both women and men teach ICT (50/50) and, surprisingly, women tend to be better because they are driven by a desire to achieve.

T. Waterhouse says, “We help people to help people. We need to be able to talk the languages of the machines.” Next step in Norway is a TV show called “code-TV” which is planned to go live soon.

Nordics is also leading the e-government with Denmark at the forefront. Chief Economist Roger Schjerva said that it will be harder and harder to finance public sector because of the aging population where IT and digitalization can be an answer to save the welfare-state.

Fedict, which is the federal public service institution for ICT in Belgium, has a shared services entity to offer ICT services to all other public organisations in the country. Besides, Fedict searches and attracts ICT experts to work in the public sector through their “select” entity dedicated to recruitment. For the moment Belgium counts over 160,000 so called digital experts working in both private and public sectors. As part of their e-government strategy, Fedict manages projects like eID (electronic identity card), Police-on-web, Tax-on-web and runs awareness raising campaigns like peeceefobie and Internet for All.

Full programme of the event is available online.