03 Nov Coding is coming to telecentres

Posted at 11:34h in Coding, News by Andrea Bedorin

The European Coding Initiative (allyouneediscode.eu) organised a high level launch event in Brussels on 12 October 2015 as a contribution to the Europe-wide initiative EU Code Week on promoting coding. EU Code Week was running from 10 to 18 of October this year. 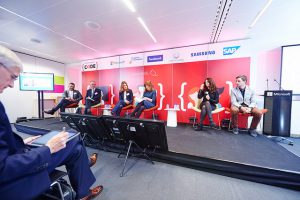 Photo credits: All you need is code (European Schoolnet)

The event took place in Microsoft Europe premises and saw a number of European policy makers, industry and civil society representatives, including Telecentre Europe. The key messages were focused around bringing coding and programming both in formal and informal learning settings so everyone can get hold of code. During his speech Don Grantham, President of Microsoft Central and Eastern Europe (CEE), said that e-skills are the competence to boost Europe’s innovation and competitiveness. European Schoolnet used the occasion to launch a new report on how Ministries of Education across Europe are integrating coding in the school curricula.

Some of our members actively contributed to the EU Code Week as well:

NCBI in Czech Republic organized two webinars to promote the campaign. One webinar introduced beginners to Microsoft Visual Studio on coding and possibilities of Visual Basics, another focused on coding using Kodu. 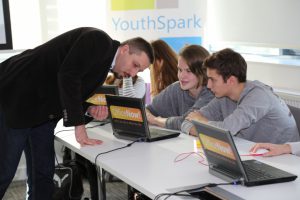 In 8 locations in Poland, FRSI organized 16 coding workshops for 278 students (10-15 years old) and a special workshop for 11 kids in their office. Information on these activities were featured in several traditional media channels, including main channels of Polish radio and online portals (e.g. ngo.pl).

Fondazione Mondo Digitale (Italy) organized an event in a high school of Rome, together with a local dotnetcode.it community of Microsoft programmers. The DotNetCode.it community will help the school develop an app to manage alternative didactic activities.

These TE members together with other seven organisations are also partners in Code Your Future campaign run by Telecentre Europe in partnership with Microsoft. The campaign will train staff working in telecentres to introduce Microsoft coding resources to their young users coming from underprivileged areas.

CodeMob Toolkit on teaching coding and mobile devices in telecentres