Posted at 11:07h in News by Andrea Bedorin

Since 2008, Telecentre Europe has organized 7 annual gatherings for its member organizations and stakeholders that brought together around 600 participants from all corners of Europe and beyond. European Commission’s ongoing campaign eSkills for Jobs and its sister initiative Grand Coalition for Digital Jobs provided the framework for this year’s conference in Croatia.

This year Telecentre Europe Annual Conference (TEAC) 2014 brought to Croatia over 120 representatives from NGOs, European institutions, academia and business to highlight the role of eSkills for employment, adult education, digital inclusion and media literacy. The biggest gathering since Telecente Europe was founded, was organised with the help of its project partners Unite-IT, Trans e-Facilitator and Telecentre Multimedia Academy, and the local partner and Croatian member Telecentar.

The event is targeted to professionals in the field of telecentres, adult education on eSkills and other ICT experts and enthusiasts working with digital empowerment initiatives. Public ICT learning centres (also called Telecentres) act as the key enabler in reaching people to learn new skills and improve their digital competences to get empowered in a digital society. Hence, TEAC 2014 covered eSkills training and certification for digital jobs, lessons learnt from policy-driven initiatives like Local Coalitions for Digital Jobs, the role of e-Facilitator as a multiplier of digital skills and a need for digital media and information literacy.

Day one dedicated to collaboration and Unite-IT 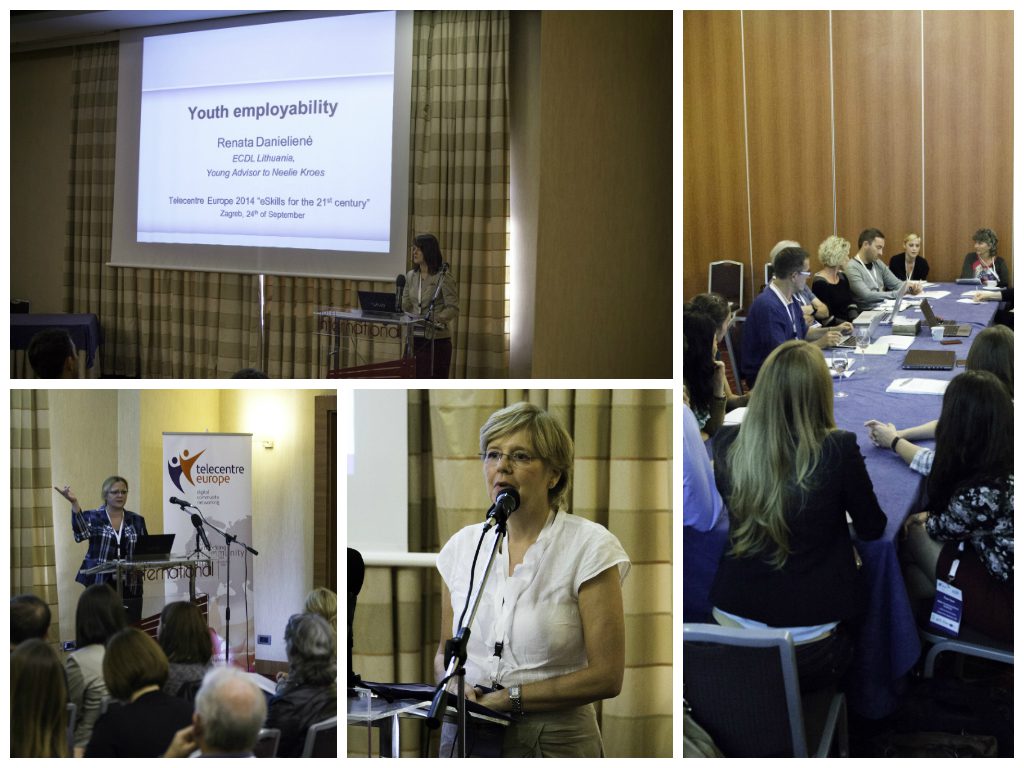 Peter Palvolgyi, UNITE-IT Project Manager, opened the three day conference and introduced the Unite-IT project by stressing the importance of synergies between practitioners and policy makers in the field of digital inclusion and empowerment. Gabriela Barna from the Romanian organisation EOS (Educating for an Open Society) that is one of project partners at Unite-IT, sent a clear message about the need to strengthen organizational collaboration amongst stakeholders like NGOs and telecentres so that they can speak in one voice to reach out to the European Commission and other policy makers.

The agenda was followed by four presentations given by invited speakers to address trends and challenges of different groups that are beneficiaries of digital inclusion and empowerment policies. Angela Andersson (DG EAC, European Commission) introduced the new adult learning platform EPALE for professionals which aims to increase the impact and recognition of adult education for growth and inclusion. It will be available in 24 European languages in early 2015 and will contribute to other EU policies. Renata Danielienė as Young Advisor to Neelie Kroes in Lithuania said that the potential of job mobility could help to tackle youth unemployment.

The real questions that still remain unanswered are: how to motivate young people, how to ensure they have the right skills, and what tools are out there to help them enter the labour market.

Assistive technology and e-Inclusion was another topic addressed by Magdalena Dimkova-Velevska (Open the Windows, Macedonia) who pointed out that not only people with disabilities but also the elderly can make use of these technologies. Magdalena shared the results of their Project for e-Accessible Education. Adriana Gil-Juárez (Universitat Rovira i Virgili) and Joel Feliu (Universitat Autònoma de Barcelona) raised a simple question about gender stereotypes regarding the use and careers of ICT: is it really a matter of choice? They believe that it is wrong to think that women are not interested in learning ICT. The reasons can be due to other factors that make these careers unattractive for girls and women: self-confidence, lack of role models, learning styles, etc.

The role of eSkills, digital jobs and e-Facilitator profession on Day Two 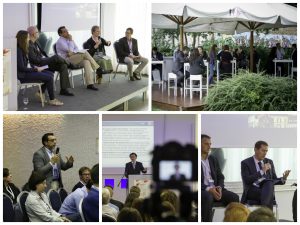 Mara Jakobsone, the Chair of Telecentre Europe, and Hrvoje Balen, the Coordinator of the eSkills for Jobs campaign in Croatia, kicked-off the second day of the conference. M. Jakobsone outlined the goals of the conference and invited participants to share and multiply knowledge. H. Balen presented the current status of eSkills for Jobs campaign in Croatia. He explained that even though Croatia is still in the recession, but the ICT sector is growing with almost 30,000 ICT experts working in the country. The number of ICT jobs advertised is also rising and, according to the results of Croatian companies surveyed, over 60% of employers are looking to hire software developers.

The Internet pioneer in Croatia, ICT researcher and professor Predrag Pale was provocative in his keynote speech addressing different aspects of eSkills for jobs and ICT developments both in Croatia and in Europe. As he pointed out, every profession has a buzzword, and in ICT that word is a number: 900,000. We have all heard it before, be it little or not, but the real question to ask as P. Pale suggests is what types of jobs there will be available and not how many. According to the E-Skills Forum definition, these jobs can be divided into ICT practitioner, ICT user and e-Leadership skills. They all address different targets: from those who build computer systems to everyday people who need to know how to use them to businesses who make profit. And in fact companies are in the position to shape these new jobs and determine the skills required. They are the ones who advertise for such positions as engine optimization specialist, user experience designer, community manager, cloud specialist and others. According to Mr. Pale telecentres are in an excellent position to teach ICT users:

“Telecentres have this unique and very important role at getting to all types of people in their communities and raising awareness based on their needs.”

“Here the role of NGOs is essential”, A. Riedl says “because NGOs can guerrilla and transform the system. One successful example is the EU Code Week”.

Gert De Laet talked about the next industrial revolution – the Internet of things and that around 7,000 people at Cisco will be re-trained to support new technological needs in the job market as well as consumer market. In the meantime Local Coalitions for Digital Jobs are raising awareness locally and trying to help people use ICT to make their life and work easier – an example is Lithuania with a coalition that is alive and well actively engaging in campaigns like Get Online Week, Safer Internet Day, eSkills for Jobs and the Code Week.

Four speakers joined the second panel: Ilona Kish (Reading & Writing Foundation) representing the role of libraries, Pedro Aguilera from Spanish Association of Telecentre Networks, Christoph Kaletka (Technical University of Dortmund) stressing the need for professionalization of staff in telecentres, and Digital Champion in Austria Meral Akin-Hecke. M. Akin-Hecke shared about two multi-stakeholder initiatives in Austria: the “Internet for all” initiative of Telekom Austria for school students, where employers are engaged as trainers, and another initiative called “Safer Internet Network” which is an EU project to reach parents and society in general about the Internet, new topics, and new tools widely used by young people. I. Kish stressed the fact that 60,000+ European libraries are still being used with over one million visitors each year. Today libraries are even more important as they serve additional functions such as community hubs and training points.

“1 in 5 EU citizens have problems with basic literacy. So if you cannot read or write, you’ll have problems on a digital level,” concluded I. Kish.

P. Aguilera’s message was about the e-facilitator’s figure in telecentres and he expressed concerns that more than 40 countries do not know about the profession of e-facilitator. From the Spanish experience P. Aguilera sees that the mission of telecentres have changed moving from digital literacy (using computer software) to digital education (using technology to make all aspects of everyday life easier). Ch. Kaletka highlighted the fact that telecentres are a new way of dealing with social problems, but awareness raising, social recognition and more formalised work are the two challenges telecentres should act on.

Media literacy and situation in Croatia 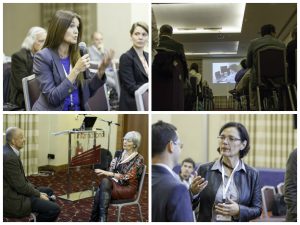 “Learning in the 21st century has to involve media”, said S.Reynolds.

Philip Penny from Dun Laoghaire Institute of Art, Design and Technology talked about the iProfessional project which aims to enhance the performance of education systems through media education. Igor Kanižaj (University of Zagreb) pointed out that media and information literacy (MIL) is not reflected in Croatian government strategies. But while there is a lack of policy support, the NGO sector has its own solutions: promoting media and information literacy in schools by student volunteers. Mislav Balković (Algebra, University College for Applied Computer Engineering) addressed employment opportunities in the multimedia sector and said that the change in perception “job for life versus knowledge for job” is necessary because knowledge is a generator of competitiveness. Nela Gudelj who works in Croatian Radio Television sees the challenge of producing more high quality content with less manpower and, therefore, new eSkills are needed for media specialists.