What a telecentre looks like in Brussels: Telecentre Europe member profile • ALL DIGITAL
14401
post-template-default,single,single-post,postid-14401,single-format-standard,ajax_fade,page_not_loaded,,qode-title-hidden,qode-theme-ver-10.1.2,wpb-js-composer js-comp-ver-6.9.0,vc_responsive

28 Nov What a telecentre looks like in Brussels: Telecentre Europe member profile

Posted at 16:18h in News by Andrea Bedorin

Telecentre Europe visited one of its Belgian member organisations Maks vzw in November. Maks stands for media action Kuregem city and is a non-for-profit organisation situated in one of the most deprived neighbourhoods of Brussels, called Kuregem. 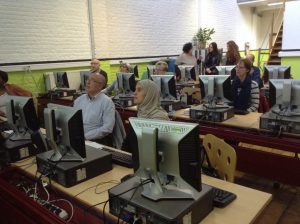 With a team of 40 employees Maks vzw serves approximately 1,500 users every year on employment counselling, entrepreneurship in social economy, IT and new media training and other intercultural and multilingual activities. Kuregem residents come from different nationality backgrounds and only 50% of them have a primary school degree (until 12 years old). This is why after riots in 1999 the Flemish government founded Maks vzw: a telecentre with public Internet access and a community space to meet and learn.

What does Maks vzw do?

The organisation works as a telecentre offering:

In addition, Maks vzw offers design services to other organisations such as logo and website design, layout, copywriting, short presentation films and DVD menus. This is supervised by one of the three subdivisions Kurasaw Productions that normally employs same telecentre users after they gain necessary skills. Kurasaw Tewerkstelling takes care of employment counselling services to help the unemployed to find jobs.

The organisation also partners with schools on digital media projects. Maks vzw and students of Sint-Lukas Art School together developed a computer game about the digital gap and access to the Internet in the third world for the 10th anniversary of another NGO fighting digital divide called Close the Gap. South African archbishop and peace activist Desmond Tutu came to Brussels to play the game with Neelie Kroes last month. Watch a video reportage by TV Brussel.

Maks vzw offers 2 year professional traineeship in desktop publishing design that is supported by the Flemish government. Some trainees may even stay to work as a staff member for a bit longer. Currently 26 former trainees have joined the staff (more than half of employees). In this way Maksz vzw facilitates the transition from gaining digital skills to getting the necessary job experience.

Other services include basic IT training and IT skills needed for a job search as well as employment counselling though media skills, e.g. creating short CV videos using digital storytelling methods. J. Debognies told us that 50% of learners manage to find a job after the counselling at Maks vzw. In addition, the organisation has a center which is open every Wednesday for those searching for a job.

Community building through IT skills

Maks vzw also does an amazing job in connecting generations, the elderly and young people, in the community. Kuregem is known for many immigrants and there are certain stereotypes among the local and foreign populations, fuelled by a big generation gap (most of the local population is seniors, while the majority of the youth come from immigrant backgrounds).

Maks vzw has become a place for older people to get to know youngsters and learn from each other by doing multimedia projects together. These few months lasting intergenerational projects help not only to learn digital skills, but also to come in contact with each other and break these stereotypes. V. De Leener said that many elderly people make friends with young immigrants after such projects: they bake cakes and bring them to trainings and youngsters walk seniors home.

Structural recognition is one of the main challenges Maks vzw faces. With so much work put in trainings and social projects, V. De Leener believes that:

telecentres deserve to be recognised for their work and should be given resources to support their operations – just like any other educational and cultural organisation.

Another common problem is scarce resources. Every year Maks vzw staff has to look for projects and other funding opportunities to earn the money so they can sustain their activities.

For Maks vzw media literacy is about making co-creative projects with people in the community: multimedia projects are more motivating and allow users to be creative. Combined with social topics these trainings are the perfect recipe how to attract and engage both old and young persons in learning digital skills for life and for work.