Posted at 11:50h in News, Past events by Andrea Bedorin

Under the title “Telecentres: get to work” the fourth Telecentre-Europe Summit took place in Brussels, Belgium during 27-28 October 2011, and brought together telecentre network leaders and eInclusion actors from all over Europe.

This year again, the event was held under the patronage of Neelie Kroes, Vice-President of the European Commission, responsible for the Digital Agenda.

The event explored how telecentres can improve employment and economic growth for their communities and included three main topics: 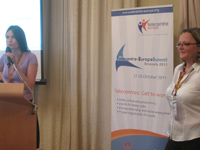 The summit provided an excellent opportunity to discuss, network and collectively contribute on issues related to European telecentre networks and other eInclusion themes. The programme included a series of interactive plenary and parallel sessions and a marketplace for the dissemination of projects & project ideas. Delegates valued their participation very stimulating and left with a real sense of action happening and of recognition for the work they are doing.

On day 1 the summit was launched by a warm welcome given by Gabi Barna, Chair of Telecentre-Europe AISBL & Ian Clifford, Deputy Chair, together with Laure Lemaire, Director of the belgian host organization Interface3. 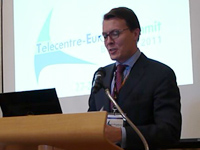 Once launched, keynote speaker Constantijn Van Oranje-Nassau, Senior Advisor Cabinet Kroes at the European Commission embodied Neelie Kroes’ patronage of the summit through his speech “Getting every European Digital” in which he celebrated the crucial role of telecentres in awareness raising and in reaching the 27% Europeans that are not yet online. He also announced a letter from the President of the Commission to be sent out to Member States who will be urged to adopt comprehensive long term digital literacy policies and to get actively involved in the EU online week.

During the first plenary session, John Vassallo from Microsoft, Miguel Raimilla from Telecentre.org Foundation and Katarzyna Balucka-Debska from the European Commission emphasized the importance of the eSkills training done by telecentres as 90% of the jobs will soon require some level of digital literacy. “The more ‘e’ we can put in any kind of training, the better” said Katarzyna Balucka-Debska. 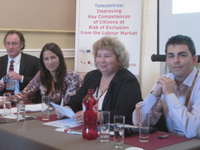 The next session showcased how Telecentre-Europe’s “Get Online Week” campaign focuses on bringing a large part of those 27% offline Europeans online. Mara Jakobsone from LIKTA, Latvia explained the ingredients for making the campaign a success and Margarida Ribeiro from the Knowledge Society Agency of the Portuguese government presented the way in which governments can benefit from their involvement in such a campaign. Telecentre-Europe’s Operations Manager Laurentiu Bunescu then announced that next Get Online Week campaign will take place from the 26th to the 30th of March 2012. The ambition for next year is to work with national partners of all European countries and thus make the campaign a truly pan-european event. Jonathan Murray from Digital Europe announced that next year, the Get Online Week will run parallel and in collaboration with the eSkills week campaign that every year reaches about 65 million through public bodies & ngo’s. 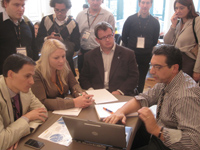 The presentations of the plenary sessions then made room for networking and mutual support among the networks of telecentres who were given the opportunity in a first marketplace session to share project ideas, to improve them and to build a consortium to submit new project applications.

In the second plenary session the speakers discussed the importance of small & mediumsized entreprises and social entreprise models for the sustainability of telecentres. Andrea Parola from the European eSkills Association stated that using more services ‘in the cloud’ would give SME’s the possibility to do more in an easier & cheaper way. Mara Jakobsone added that helping out small enterprises in the use of eServices can be a means of income for telecentres. Gabriel Rissola from The Institute for Prospective Technological studies warned though that the emerging profession of the eFacilitators who provide those kind of trainings at the telecentres, still did not receive any recognition in many member states. Telecentre.org Foundation’ Executive Director Miguel Raimilla also shared his vision on sustainability: each telecentre should become a social entreprise: “It has to do ‘good ‘ and to do ‘well’. It should achieve its social goals, but the numbers must work!”. 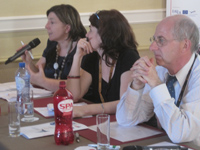 Next on the program were two parallel sessions: “Digital skills for young people” and “Telecentre content creation”. In the first parallel session Melissa Pailthorp pointed out that Microsoft is focusing on youth unemployment and wants to help youth & students through different citizenship programs at ngo’s, telecentres & universities. Gérard Valenduc from the Work and Technology explained that “digitally vulnerable” young people use only limited internet services versus a more polyvalent use of ICT. Among all young people there is also a usage gap between their ‘preferred’ usage and the formally ‘expected’ usage by the information society. Lieve Van den Brande from the European Commission amplified this constatation and said: “All our youngsters are not digitally included as they are not able to analyze the information offered by the tools in a critical way”.

The second parallel session concentrated on the content production in Telecentres and how to transform this in a revenue source for sustainability. Zarko Cizmar showed the example of Telecentar Zagreb, where multimedia production & education and partnerships with the public sector generate income. Milvia Rastrelli, from the VET4 eInclusion Project stated that the recognition of the profile of eFacilitators through a European certificate will bring scalability via a common curriculum and hence upgrade the quality of telecentres training content. To conclude the session, Andreea Bereczky showcased how the Knowledge Economy Project for rural Romania assures IT infrastructure and sustainability through value added services like training, assistance and counseling. 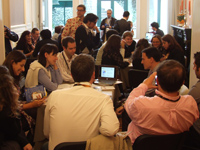 Then it was time for a second marketplace session, this time creating the opportunity to disseminate and highlight the results of ongoing or completed projects.

During the third and last plenary session of the first day all attention was focused on how to deliver hard figures on the impact of telecentre programmes. Cristobal Cobo from the Oxford Internet Institute first introduced the term “Next generation users”, showed the rapid rise of social media and demonstrated that 38% of ex-users stopped using the internet because they found it too expensive. Gabriel Rissola from The Institute for Prospective Technological studies introduced a new survey that will measure the impact of eInclusion actors on digital literacy, skills and inclusion goals of EU’s Digital Agenda. Maria Garrido from the University of Washington then detailed how this survey will look like for questioning telecentres, through Telecentre-Europe’s impact assessment survey that will be launched soon. 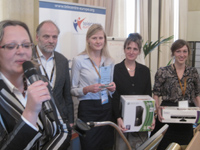 The first day ended with a visit and dinner at the Atomium, sponsored by Microsoft. The visit lead participants to the different spheres (not ‘balls’!) open to the public and dinner was served in the restaurant situated at the top of the symbol of Europe’s Capital. 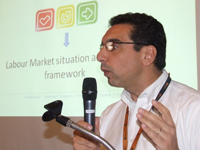 Day 2 of the conference was dedicated to the launch & demonstration of the employment toolkit “Key Competences for All” that was born out of a partnership born under the auspices of Telecentre-Europe.

During the plenary session, Pedro Aguilera from Esplai Foundation, Spain first explained the importance of an online multilanguage employment toolkit. Then Gabriel Rissola and Andrea Diaz from D-O-T, Spain presented their multi-country analysis and Mara Jakobsone from LIKTA, Latvia showcased the pilot testing performed by her organisation. To conclude, Elena Lanzoni from Interface3, Belgium explained the methodology of the employment toolkit. 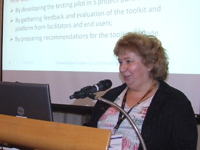 During the workshop session that followed, Mara Jakobsone presented the project guidelines for new users and how to exploit & disseminate the employment toolkit. Andra Jakobsone from LIKTA demonstrated the handbook and Alina Zamfir from EOS, Romania showed the valorisation made of the toolkit. At the end of the workshop session, Pedro Aguilera from Esplai Foundation, Spain lead the discussions regarding the localization of the toolkit in other languages, the cultural adaptations and the process for hosting other language versions on the project website. Gabriel Rissola from D-O-T, Spain informed the audience about available funding for national adaptations of the toolkit. 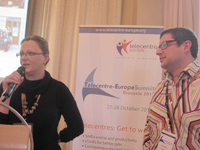 At the closing session, Pedro Aguilera from Esplai Foundation, Spain summed up the next steps and actions to undertake with the European network of telecentres regarding the employment toolkit.

Parallel to this workshop session the second General Assembly of Telecentre-Europe AISBL was held, were formal members organizations were handed over the first year activity report and discussed past and future actions of the organization.

The summit ended with a quick wrap-up of this year’s summit by Telecentre-Europe’s Deputy Chair Ian Clifford and big thanks from Chair Gabi Barna to all participants, stakeholders & supporters for their active involvement and dedication that led to a successful event.

TE & TCF at the International Congress for Telecentre Managers in Spain