Posted at 18:00h in News by Andrea Bedorin
By Ilona Griniute

It’s a fact that with age people tend to participate in social and community activities far less. In addition, physical disabilities and health problems can lead to forced social isolation. But recent studies confirm that social media is becoming part of the elderly life. Pew Internet reports that numbers of social media users aged 50 and above have doubled in the past years. 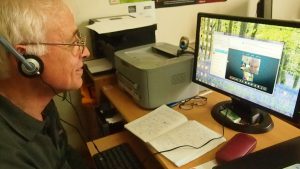 Facebook, Twitter, LinkedIn, MySpace and other social networking sites have now become a communication tool for seniors. According to nydailynews.com, nearly two-thirds of 50-64 year olds and 43 percent of those aged 65+ are now on Facebook. That proves older people also want to stay in touch with their younger family members and follow their lives online. But is it only about that?A recent research by T.Nef et al. (2013) reveals that people over 50 years old is the fastest growing user group on Facebook. Reducing social isolation and loneliness and a strong willingness to be involved in their family life are among the most important motivators for seniors to go on social media. Also participation in communities, creating new social circles and establishing new relationships online make older people use social media.

Housing Learning & Improvement Network (LIN) gives four reasons why we see seniors on social media: it’s the need to connect with someone from the past, to connect with people who have the same chronic disease, to keep in touch with younger family members and gaming. Yes, we all need entertainment!

And there’s more to social media than this. Based on seniornet.org, social media tools can also help seniors research and learn about topics they care or hobbies they’d like to practice. It can be a way to get a quick answer to a question by reaching out to representatives on Facebook or Twitter instead of dialing a company phone. Social media is a brilliant tool to keep yourself entertained and watch a video, read an e-book or play a game.

However there are still many older people to be engaged in social media activities. T.Nef et al. discusses a number of barriers that prevent older generation from using social media. Privacy concerns and trust top the list as a major obstacle. Technical difficulties such as a lack of computer skills and heavy web design make elderly struggle as well. Older people also fear of inappropriate content when using social media. Another important finding tells that older users still find it difficult to grasp and understand the purpose of social networking sites. So what can be done to promote social participation online among seniors?

Carers could play a vital role in educating the elderly by sharing their own experience about social media. Having conversations with their care givers about the sites and content available out there could raise the trust and encourage older people to go on social media. Obviously, there are many benefits of using social media sites and tools and perhaps an older person just needs to be aware of them to start his first profile online.