Get Online Week 2014: New records in Sweden and a call for ‘home’ • ALL DIGITAL
14525
post-template-default,single,single-post,postid-14525,single-format-standard,ajax_fade,page_not_loaded,,qode-title-hidden,qode-theme-ver-10.1.2,wpb-js-composer js-comp-ver-6.9.0,vc_responsive

Posted at 17:51h in News by Andrea Bedorin

The annual Get Online Week took place for the fifth time this year. The campaign which has become a nice European tradition, every year unites many ICT learning centres (aka ‘telecentres’) across Europe and brings people together to learn more about the Internet and ICT skills. There’s a lot behind the event, and this is what Linda Sandberg who coordinated the GOW 2014 in Sweden shared with us.

What is the Get Online Week (GOW) to you as a project leader? 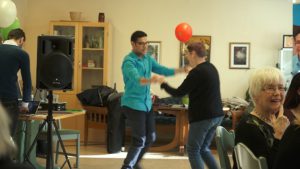 GOW14 in Sweden: learning ICT can be fun!

The Internet is for everyone, and Sweden is at the forefront of using the Internet. This is one of our major strengths. But there are still around 1 million Swedes who are digitally excluded. The prevailing view among most people is that everyone in Sweden is online and “digitally included”. As a result, in a country where digitalisation is a natural part of life and a way of life, not being able to use the Internet creates complications and discrimination.

Was this year’s GOW more special or different than before?

Yes, Digidel 2013 is now the Digidel Network. The Digidel 2013 campaign ran for three years and was completed in 2013. It was run by 400 partners in the network. The objective of the campaign Digidel 2013 was to join forces to get 500,000 more Swedes online before the end of 2013. And we did it! Four organisations will support the Digidel Network in 2014: The National Library of Sweden, National Council of Adult Education, Municipalities for Joint Development of e-services – Sambruk, and Swedish Adult Education Association. Sambruk has taken over the responsibility for organising the Get Online Week in Sweden.

What would you call the biggest achievement of GOW this year?

We did break a new Swedish record! 4,803 more people online.

What do you think is the biggest challenge for GOW and similar initiatives in Sweden?

Digidel is a network. We are breaking records, but we are homeless. The Swedish government sponsored GOW. But what if we could have a platform and a place with people working for digital inclusion at national level all the time? That would be fantastic!

Do you have any story or adventure around organizing this year’s GOW?

We had the opportunity to dance together with the IT-GUIDES in Örebro and it was so much fun. Music from all over the world!

How did you use social media to promote the campaign?

We used Facebook, Twitter and Instagram to share all the things that happened before, during and after the week. We also did a pep-talk movie for the participants and a movie about GOW in Sweden.

Your final video looks very good! How did you go about producing it? Was it difficult? 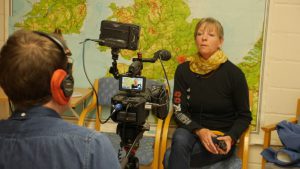 GOW in Sweden: the making of the video

We had a perfect team for the movie: a filmmaker called Kjell “Kjelleman” Eriksson and his assistant Jakob Vastamäki and a project leader (me). We have all worked together with these topics before. That made it easy! And the wonderful people in the network of course!

The GOW campaign in Sweden received coverage in media, newspapers, radio, blogs and in social media. 340 events were organised with almost 3,000 participants and around 2,000 people trained. The campaign offered everything: from activities for job seekers and home buyers and those who want to learn more about public e-services, to music lovers and those who wish to talk to their nearest and dearest. With so many people involved across all media channels, the Get Online Week proves the need for such initiatives not only in Sweden, but also in other European countries. Let’s get more people online next year!