First anniversary of Telecentre-Europe as a Non-Profit International Association • ALL DIGITAL
16742
post-template-default,single,single-post,postid-16742,single-format-standard,ajax_fade,page_not_loaded,,qode-title-hidden,qode-theme-ver-10.1.2,wpb-js-composer js-comp-ver-6.9.0,vc_responsive

Posted at 11:39h in Employability and Entrepreneurship, News by Andrea Bedorin

Exactly one year ago, on October 14th, 2010, Telecentre-Europe grew from an informal network of telecentre practitioners into a legal entity and became established as Telecentre-Europe AISBL – a Non-Profit International Association based in Brussels, Belgium.

During its first year of activity, Telecentre-Europe AISBL has:
» Elected a Management Board of 7 members from Romania, UK, Latvia, Belgium, Hungary, Spain and Serbia
» Established a Staff with a Project Manager working from Romania and a Communications Manager working from Spain
» Incorporated 22 European telecentre network organizations as formal members
» Organized a successful Get Online Week, bringing online 112074 people that had never accessed the internet before
» Advocated for its cause at events in Europe and other continents
» Successfully delivered the Employment Toolkit “Key Competences for All”
» Reached 411 community members (with a growth of 18% this year), 347 Facebook ‘likes’, 107 Twitter followers and 357 Newsletter subscribes

Many congratulations and thanks to all the people that have made this first year a success! 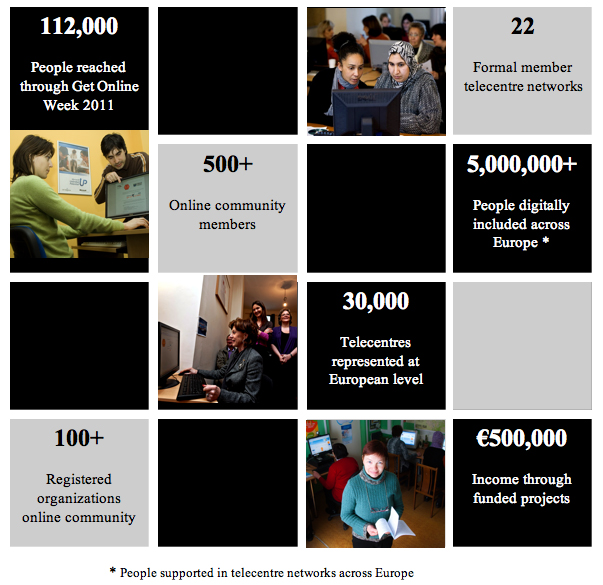