Posted at 17:50h in Employability and Entrepreneurship, News by Andrea Bedorin

It is expected that over 70% of the world’s population will move to cities by 2050. Thus it is critical to rethink the existing urban infrastructure and start building smart ICT systems that will integrate transport, health, energy, environment, safety and security for the benefit of everyone. 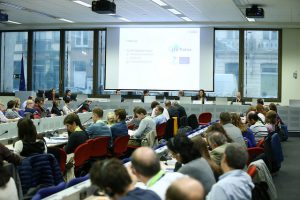 To find out more, Telecentre Europe joined the workshop on Internet of Things: Enabling the connection of citizens and regions of Europe organized by DG Connect of the European Commission as part of the Open Days event last week dedicated to European regions and cities.

Eric Gaudillat from DG Connect welcomed the guest speakers and participants by sharing the news about a new EU initiative on Internet of Things (IoT) to create a common framework regarding user acceptance, privacy, safety and the interoperability of systems. Large scale pilots will be launched for those interested to participate and online consultations are available at: http://ec.europa.eu/eusurvey/runner/iot-lsp-2014

The first speaker Mirko Presser (Alexandra Institute, Lab Smartcities Denmark) in his presentation highlighted how much we have progressed from connecting PCs a couple of decades ago to connecting nearly everything today. As M. Presser said, this proves that technologies per se do not matter, but what really matters is services that come to life thanks to these technologies. He also talked about the

importance of educating yourself and this is why Alexandra institute released a comic book: nicely designed and easy to read online book to better understand what IoT is about (iotcomicbook.org). 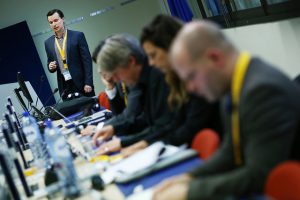 Payam Barnaghi (University of Surrey UK) presented data analytics potential for building smart cities. Citizens and their connected devices are a valuable source of information that can help collect data and create smart systems to predict city problems such as traffic accidents or flooding. Alexander Sinitsyn (Data & Analytics for Smart Cities, Philips Research, The Netherlands) talked about connected lighting in cities as one example of digitization and The Edge building in Amsterdam. According to A. Sinitsyn, IoT is the key enabler to sustainable solutions in cities and all parties – citizens, businesses and governments – need to team up to address societal changes.

Francesca Bria from NESTA (UK) gave many citizen-driven project examples in the area of digital social innovation. She stressed the fact that ICT and the Internet have enabled co-creation and disruptive innovation which competes with traditional R&D. Today it is all about open: hardware, data, knowledge and networks. NESTA is leading an EU wide research on digital social innovation funded by the European Commission to map organizations working in this field. Check the results on the official project website: digitalsocial.eu.

This year the 12th edition of Open Days took place on 6-9th October across almost 30 different venues in Brussels city gathering over 5,600 participants. Open Days is an annual Brussels-based and the biggest of its kind European event aiming to involve officials from regions and cities in the making of EU policies and investments. A high number of workshops are organized every year for experts, policy-makers, academics and others to meet and exchange their know-how and ideas. Open Days is co-organised by the EU Committee of the Regions and the European Commission.

Check your digital competences and help test the e-assessment tool!

Getting women online and into businesses in Tudela