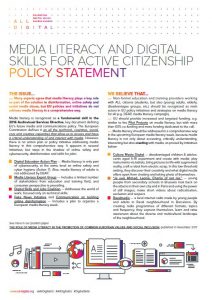 On 27 September ALL DIGITAL and MEP Emilian Pavel organised a policy debate at the European Parliament ‘Media Literacy and Digital Skills for Active Citizenship‘ where the statement was announced.

… Many experts agree that media literacy plays a key role as part of the solution to disinformation, online safety and social media abuse, but EU policies and initiatives do not address media literacy in a comprehensive way.

Media literacy is recognized as a fundamental skill in the 2016 Audiovisual Services Directive, key document defining EU’s future media and communications policy. The European Commission defines it as all the technical, cognitive, social, civic and creative capacities that allow us to access and have a critical understanding of and interact with media. However, there is no action plan or policy initiative addressing media literacy in this comprehensive way. It appears in several initiatives, but stays in the shadow of online safety and cybersecurity, disinformation and skills for jobs:

… Non-formal education and training providers working with ALL citizens (students, but also (young) adults, elderly, disadvantages groups, etc.) should be recognized as main actors in EU policy initiatives and strategies on media literacy for all (e.g. DEAP, media literacy campaign).

… EU should provide increased and targeted funding, e.g. similar to the Pilot Projects on media literacy, but with more than 60% co-funding and more funding dedicated to the call.

… Media literacy should be addressed in a comprehensive way in the upcoming European media literacy week, because media literacy is not only about accessing, critically understanding, interacting but also creating with media, as proved by initiatives below:

Get Your Facts Straight! Fighting Disinformation and Fake News Through Media Literacy