08 Aug Telecentre Multimedia Academy: Meeting in Granada and next steps 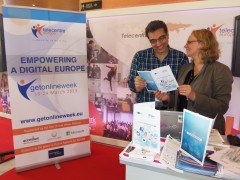 At the end of May this year the partners from the Telecentre Multimedia Academy (TMA) held their second meeting in Granada. Hosted by  the Spanish partner organisation Fundacion Esplai, the meeting reviewed project achievements and coordinated further activities. The ultimate goal of the project is setting up Telecentre Multimedia Academies in the six participating countries and to become a reference point for media literacy education for adult learners in Europe.

The consortium of Telecentre-Europe and its member organizations from Croatia, Hungary, Latvia, Lithuania, Serbia, Spain, and Romania are already implementing the TMA project, aimed at providing a learning pathway towards media literacy specifically tailored for adult learners.

During the first phase of the project partners conducted an extensive review of the present media literacy learning possibilities for adults in their countries and EU as well as identified the needs of ‘clients’. The methodology adopted for carrying out the review included desk and field research: after the first review based on desk research, a stakeholder analysis was carried out in order to identify key informants in EU countries about the topic addressed. Interviews and questionnaires were carried out in all partner countries for gathering important data. The full report and its abbreviated version will be available at the project’s website (http://tma.telecentre-europe.org/) in September 2013.

The following two days were dedicated to the active TMA project dissemination in the Spark 2013 conference which brought together over 1,300 participants from the information and communication technology for development (ICT4D) sector as well as private, public, and nonprofit organizations from around the globe. The Telecentre-Europe booth attracted a lot of European and Latin American countries representatives interested in TMA project .They were introduced to the project with the help of brochures in English and Spanish. TMA project partner Žarko Cismar, the president of Telecentar organization from Croatia, participated in the Building the Capacity of Telecentre Operators session focused on the sustainability of telecentres. He introduced the TMA project needs, aims and results expected during and after the project lifetime.

In the next project development period partners will focus on the design and development of media literacy training programme as well as training material of two levels (basic and advanced) . All TMA partners will participate in the creation process as well as pilot training. The ultimate goal of the project is setting up Telecentre Multimedia Academies in 6 countries and to become a reference point for media literacy education for adult learners in Europe.

This project has been funded with support from the European Commission.

eMedia: Media Literacy and Digital Citizenship for All