Posted at 15:47h in News by Andrea Bedorin 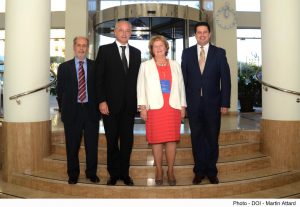 Telecentre Europe’s annual summit opened last Thursday its 6th edition in Malta, attracting telecentre leaders and stakeholders from across Europe and exploring strategies, plans and common actions on the themes of digital inclusion, digital jobs, youth unemployment and telecentre sustainability. The focus of the event was the recent shift in the EU from digital inclusion to digital empowerment of citizens.

The Summit was opened by the Hon. Dr. Edward Zammit Lewis, Parliamentary Secretary for Competitiveness and Economic Growth who stressed that a sustainable digital economy and an inclusive digital society is highly dependent on skilled people who can engage effectively with technology. He lauded the telecentre model that empowers grass root organisations towards achieving digital communities.

Mara Jakobsone, Chair of Telecentre-Europe, outlined the work that Telecentre Europe has been actively engaged in over the past year and Gabriel Rissola, Telecentre’s Managing Director presented the organization’s strategic vision for the future.

The summit was also addressed by Mr. Godfrey Vella, Malta’s Digital Champion who commended the efforts of Telecentre Europe and encouraged the organisation to transform its members from purely training centres, into entrepreneurial and innovation champions who will also serve as agents of social cohesion and economic progress.

The event was hosted by TE Maltese member – the Malta Communication Authority (MCA), a founding member of Telecentre Europe. In collaboration with various NGOs, local councils and public agencies, this member currently operates 20 telecentres across Malta and Gozo. Dr. Edwards Woods, Chairman of the Authority, said that “the MCA is committed to continued support and contribution to Telecentre Europe as it strongly believes that this is an ideal opportunity for all European nations and regions to share experiences, those successful or otherwise.” Dr. Woods added that the Authority will continue to strive to get more NGOs and local bodies involved in the telecentre initiative as these have a central role to play in our efforts to overcome the digital divide and encourage the effective use of ICT by all members of society.

During the summit, Telecentre Europe also held its first partners meeting of the European project ‘Unite-IT,’ which is aimed at raising awareness and joint European actions to overcome the digital divide. The project, led by Telecentre-Europe together with 7 of its member organisations-including the MCA – presented its collection of best practices in the e-Inclusion field.

Thank you to Ms.Mandy Calleja from MCA for the press release, on which this post was based.

TE does it again! Successful annual conference held in Belgrade