16 May Greece: the e-skills gap and how the government is dealing with it

Posted at 14:15h in News by Andrea Bedorin 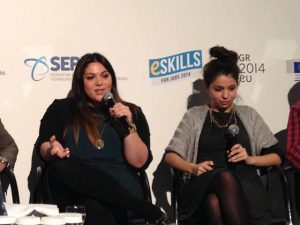 Efforts to equip people – especially young people – with the skills needed to take advantage of the opportunities offered by ICT were discussed in a conference in Athens on Tuesday May 6th. The conference was hosted by the European Commission in collaboration with the Greek government, and supported by a wide range of technology companies and stakeholders from the fields of digital skills, training and eInclusion.

The Greek government has thrown its support behind the European Commission’s e-Skills for Jobs 2014 campaign, because it sees technology as an important part of the fight to bring down unemployment. “ICT can enhance all branches of the economy and create new jobs,” said Kostas HATZIDAKIS, Minister of Development and Competitiveness, Greece in a keynote speech at the event. Minister Hatzidakis promised that during the next programming period his government would double its budget for innovation, create new incentives to expand youth entrepreneurship, and sign a National Coalition for digital jobs for Greece.

What about ICT companies?

In principle they are attracted to Greece partly because of the country’s excellent reputation for training electronic engineers. But in spite of this, ICT jobs account for just 1.6% of total employment. The average for the EU is 3.4%, leaving Greece with one of the smallest ICT sectors – as a proportion of the wider economy – in Europe.

An estimated 1,200 ICT jobs remained unfilled in Greece last year, according to the researcher Empirica. That figure is expected to rise to 1,800 by 2020.

Fortunately, many household names from the ICT industry are setting up operations in Greece. Microsoft recently set up a call centre, creating 750 jobs in the process. Huawei is considering opening an innovation centre in Athens. IBM has recently announced the creation of a centre of excellence for big data and business analytics, also in the Greek capital. HP is creating a call centre for its dealers and partners in the region, creating 100 jobs. And SAP has announced plans to create an Innovation & Value Engineering Centre in Greece. 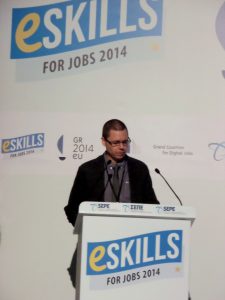 The eSkills for Jobs 2014 campaign is part of the Commission’s Grand Coalition for Digital Jobs – an EU-wide multi-stakeholder partnership designed to address a shortfall in the number of European citizens with ICT professional skills, and to exploit the employment creation potential of ICT.

The main focus of the campaign is to raise awareness of the education, training, jobs, and other opportunities that are available to people with eSkills – those who know how to effectively use digital technologies. It will inform students, unemployed people, ICT professionals and SMEs about the vast range of opportunities that ICT-related jobs present During the course of 2014, the e-Skills for jobs campaign will run in 31 European countries.

The campaign is coordinated by DIGITALEUROPE and European Schoolnet in conjunction with hundreds of national and pan-European partners including Telecentre Europe, SEPE (partner for Greece), the European Centre for Women and Technology, JA-YE, and many major IT industry partners.

Gabriel Rissola, Managing Director of Telecentre Europe said: “Our Europe-wide Get Online Week campaign this year focused precisely on making students and youngsters become aware of the relevance of digital competences in today’s job market, and not only in the ICT sector but in a wider range of activities. For example in Greece,  as part of the GOW campaign, our member – the Hellenic Professionals Informatics Society (HEPIS) – reached 5,000 young Greeks with its GetBusy.gr platform, showing them the potential of e-skills for professional careers and entrepreneurial endeavours.”

Marc Durando, Executive Director of European Schoolnet, said: ”The latest data indicate that secondary school students are still insufficiently aware of the importance of IT skills for their future jobs. We are committed to ensuring that Europe’s young people are prepared to engage in Europe’s digital future and be equipped to work in the digital age.”