Posted at 11:06h in News by Andrea Bedorin

Her title will be presented with a plaque of recognition, and she will receive a brand-new netbook for use in her work. In addition, she will be awarded an all-expense paid trip to attend the Recognition Ceremony to be held in a regional telecentre network event (specific place and date to be determined per region).

As 8 out of the 10 European women enlisted in the Top 100 are Spanish, the Spanish Telecentre Network Community Association has sent out an official statement in which it thanks the Telecentre.org Foundation for the recognition and rewarding of the efforts of the Spanish Telecentres (and of the Telecentre Network of Catalonia in particular) as a reference in the use of ICT for access to employment, support for social entrepreneurs, SME’s and digital inclusion. 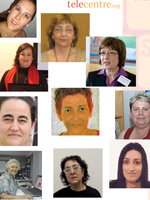 Telecentre.org Foundation and Telecentre-Europe AISBL thank all participants of this campaign and congratulate Ester Collado for this well deserved recognition as a prominent telecentre woman in Europe.