Coding Is the New Language • ALL DIGITAL
14360
post-template-default,single,single-post,postid-14360,single-format-standard,ajax_fade,page_not_loaded,,qode-title-hidden,qode-theme-ver-10.1.2,wpb-js-composer js-comp-ver-6.9.0,vc_responsive

26 Jan Coding Is the New Language

Posted at 13:22h in Coding, News by Andrea Bedorin

On January 20,2015 Microsoft Europe decoded fundamental skills that young people will need to have to be able to stay competitive at any workplace. Invited government representatives, researchers and educators all expressed their viewpoint on how to prepare youth for future jobs and how to introduce coding along with computational thinking in the European curriculum.

Minimum of technical education for everyone 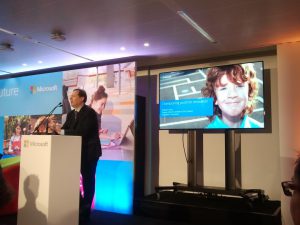 Roberto Viola (Deputy Director General at DG CONNECT, European Commission) believes that any student must have at least a bit of technical education no matter the nature of their studies chosen. 40% of corporations are looking to recruit ICT professionals, but aren’t successful. R. Viola said:

“This is about changing society and there’s only one effective response – education and educated workforce that matches the need of the market.”

The European Commission is passionate about (1) getting young people attracted to ICT professions and (2) getting senior people to use the new technology. Grand Coalition for Digital Jobs initiative strives for this purpose and was formed to engage with IT industry partners.

Business and volunteer initiatives are successful

Microsoft General Counsel and Executive Vice President for Legal and Corporate Affairs Brad Smith addressed the question of how to shape business of 21st century by linking jobs and students. Initiatives like Hour of Code are successful tools to reach out to youngsters. In 2014 Hour of Code reached around 8 million young people in 33 countries to learn coding in just one hour.

According to B. Smith, 12 EU countries have started rolling out new curriculum with ICT as a key competence, but just 3 of them have coding integrated as a compulsory class. B. Smith thinks that

“students will need four fundamental skills: to read, write, count and code. Coding is a language of new machines and technological services that people will need to master.”

With its digital literacy programmes Microsoft has reached around 6 million people worldwide. 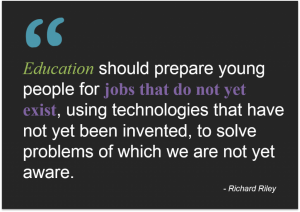 Education Richard Riley: “Education should prepare young people for jobs that do not yet exist, using technologies that have not yet been invented, to solve problems of which we are not yet aware.” Computing programme was finally introduced as part of national curriculum in the UK in September 2014.

Some young people are ahead with getting hold of coding. Roxana Rugina established her own business in Romania after unsuccessfully finding a job in France with 2 master’s degrees and re-qualifying in web development. Architecture student Beatrice Viotti from Italy developed an app to promote her region. 14-year-old Panos Economou from Greece won the Kodu Kup competition last year and continues to relate his future to coding.

What can we learn so far?

Lively debate followed the event agenda and was focused around best practice from Ireland, Bulgaria, Norway and Estonia. Mary Maloney (CEO of Coder Dojo, Ireland) stressed the fact that coding should be related to creativity which can act as an important motivator when kids get to choose the activity.

“Coder Dojo engaged around 30% of women in our initiative thanks to communicating the message through the aspect of creativity”, she said.

Besides, the mother is an important role model for a child. Thus, parents should have an act of engagement in what kids are doing after school, suggests M. Maloney, and points out that one of parents is asked to always accompany a child to a Coder Dojo club to observe and stay involved.

Kiril Rusev, who founded an IT start-up Jumpido in educational sector, expressed his concern that kids in Bulgarian primary schools are still labelled by gender stereotypes while teachers do not have the right competences to teach coding. He calls for a best practice sharing and research findings to be shared with policy makers to improve the present situation in his country. 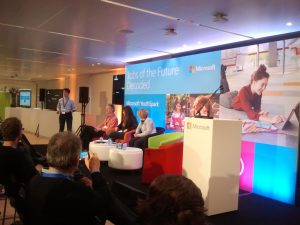 Next generation of tech innovators present their stories: Panus, Roxana and Beatrice

Oystein Imsen, a teacher from Norway and EU Code Week Ambassador, believes that it is important to get kids started coding in kindergarten, but without tech devices not to evoke negative reactions from parents. O. Imsen paid his attention to one economical factor preventing coding as activity at schools – the publishing industry. Hence, in the long run the top-down approach from policy makers like in UK is necessary for the actual change to happen in the rest of Europe.

According to Kadri Kukk (Microsoft Estonia, Hour of Code Baltics), the role of after school ICT activities is important. Around 40% of surveyed respondents in Estonia said they have learnt coding after school in coding clubs and similar places. K. Kukk thinks that both private donors as well as governmental support are needed to drive the change.

Initiatives like the European Code Week, Hour of Code and Coder Dojo sessions with MEPs can influence policy makers and urge them to support implementing changes at schools and beyond. For now the minimum that local authorities can do is to give resources like hardware, provide spaces and financial support so young people can start coding today.