Grand Opening of the Microsoft Centre in Brussels • ALL DIGITAL
14588
post-template-default,single,single-post,postid-14588,single-format-standard,ajax_fade,page_not_loaded,,qode-title-hidden,qode-theme-ver-10.1.2,wpb-js-composer js-comp-ver-6.9.0,vc_responsive

21 Jan Grand Opening of the Microsoft Centre in Brussels

Posted at 21:30h in News by Andrea Bedorin

The Microsoft centre is a modern and spacious building, which opens the doors to a new era of collaboration between Microsoft and its stakeholders for the benefit of Europe’s youth.

Telecentre Europe was one of the invitees to the Grand Opening of the Microsoft Centre in Brussels earlier this week. The event served as the official opening of the Microsoft centre to young people in Brussels who will be its main beneficiaries, but also to stakeholders from the Brussels arena: non-profit European associations, High-level Commission officials and others who have an interest in Microsoft YouthSpark in Europe and the challenging area of youth unemployment and e-skills mismatch. 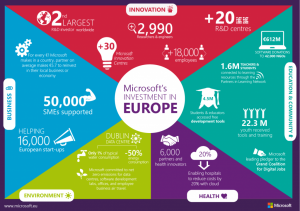 The keynotes were given by the President of the European Commission, José Manuel Barroso who addressed the audience through video, stating that job creation is the European Commission’s number one priority and “without ICT there is no innovation”. László Andor, European Commissioner for Employment, Social Affairs and Inclusion made the introductory speech referring numerous times to the high number of available jobs in the ICT sector. 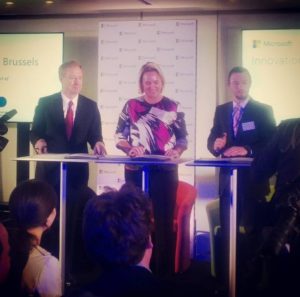 Minister of Economy and Employment in the Brussels-Capital Region Céline Fremault also spoke at the event, which marked the occasion for co-signing with Microsoft a continuation of their fruitful collaboration agreement for three more years. Minister Fremaut said that in Brussels alone there are 3.000 ICT jobs available for young people that remain unfilled. With widespread unemployment among its youth, the Microsoft centre and initiatives will surely direct a number of Brussels youngsters into training and ultimately employment. The Microsoft Innovation Centre (MIC) has already existed in Brussels since 2011 and is now integrated into the newly opened Microsoft centre. Microsoft Innovation centres are public-private partnerships focused on economic development that help the creation of companies in the technology sectors and accompany start-up development. Currently there are 30 MICs in Europe, with 4 of them in Belgium.

Coding at a young age

The highlight of the event was the live connection to a primary school in Portugal where we saw pupils as young as 6 years old learn how to code. Their teacher stressed the importance of coding not only for their understanding of future ICT related challenges but also how this task encourages other soft skills such as collaboration and creativity- all incredibly important for the current and future technology-dependent workplace. Telecentre Europe member from Poland FRSI offered a live connection with a group of teenagers in a public library, as part of the project led by FRSI called “Link to the Future. Youth. Internet. Career”. There was a lively interaction between the remote locations and the event moderator. From 11:30 am to 12:30 the event hosted a live  debate with a number of MEPs who answered video questions from European youth, live questions from the audience and social feeds.

United through one goal – make all Europeans digital!