ALL DIGITAL Summit Discussion Group: Training young people on IT skills for IT jobs • ALL DIGITAL
18642
post-template-default,single,single-post,postid-18642,single-format-standard,ajax_fade,page_not_loaded,,qode-title-hidden,qode-theme-ver-10.1.2,wpb-js-composer js-comp-ver-6.9.0,vc_responsive 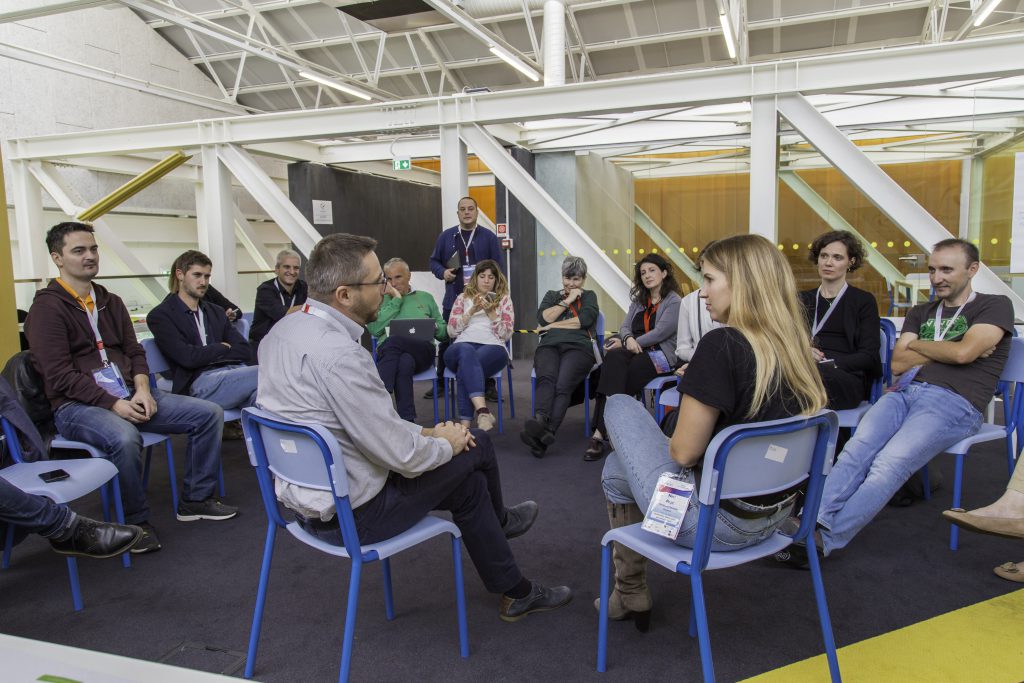 20 Oct ALL DIGITAL Summit Discussion Group: Training young people on IT skills for IT jobs

“Training young people on IT skills for IT jobs” is the discussion group held at ALL DIGITAL Summit on October 11th, 2019 in Bologna by Filippo Mantione (Lai-momo) and Joel Ferrer and Guillem Porres Canals (Esplai Foundation).

In this blogpost you can read about the discussion group and learn more about how to assess the impact of a project. 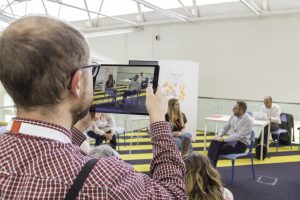 Filippo Mantione is Communication Manager at Lai-momo and has more than 15 years of working experience as Project Manager and Communication Specialist in the field of social innovation, ICT and communication. Throughout the years he has planned and developed several projects and initiatives with a particular focus on the development and moderation of educational digital platforms.

He has collaborated as Communication Specialist and Moderator to Compass, a free and interactive learning platform, aimed at helping young Europeans evaluate and develop their digital competences in line with the current digitalisation of the economy.

Joel Ferrer holds a Bachelor in philosophy, a Teaching and Postgraduate certificate in Management and Project Management E-learning.

He has been working in the field of training since 2010, in a first stage as a teacher, editor of online training content, e-learning educational platform manager and later as team coordinator in the training department.

He joined the Esplai Foundation in 2016 where he has participated in socio-educational training projects, both nationally and at European level.

Guillem is a project manager specialist on socio-educational action projects with young people with a Social Work background and a university diploma in Educational Robotics, Programming and 3D Printing.

He has worked as a clerk in municipal youth services, with features such as counselor, educator and associations advisor. 15 years linked to the Third Sector and to the e-Inclusion projects.

He currently coordinates a network of 60 digital spaces around Spain and a MOS (Microsoft Office Specialist) certification programme focused on improving the digital skills of certain vulnerable groups.

Filippo Mantione, Joel Ferrer and Guillem Porres introduced the session by presenting two projects that they are running in parallel and that have the same objectives.

Filippo from Lai-momo presented the Direction Employment, a European project funded by the EEA and Norway Grants for Youth Employment, whose aim main goal is to foster the job inclusion of young NEETs (young people between 20 and 29 years who are unemployed, not in school or vocational training) focusing on people at risk of exclusion (Roma, LGBT, Asylum Seekers) through trainings on ICT skills. Three trainings in total will take place between May 2019 and March 2021 focusing on a mix of transversal and specific competences (such as coding).

Joel Ferrer and Guillem Porres from Esplai Foundation gave an overview of the ICT Youth Employment project which is also addressed to young people between 20 and 29 years old who need to find a job. Also here, the training aims at teaching technical skills as well as soft skills. The group of students is understood as a group or groups of developers in charge of developing a project from the beginning emulating the work systems of the companies. 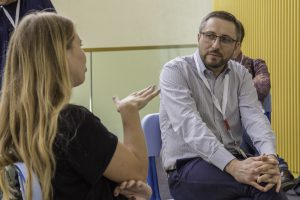 After presenting the two projects, the moderators introduced the structure of the session whose aim was to put in place a sort of job searching process to select the skills that are needed to get an IT job. The idea was that the results of the session would be a useful resource for the two ongoing projects in order to understand whether some skills are missing from the training.

The participants to the discussion group were divided into three groups: young people team, trainers’ team and employers’ team.

Each group had to select four or five topics related to:

Each group received a deck of cards that they had to deal between the participants. The cards were mainly representing points (from 5-40-100), but two cards were used to attribute roles: each group had one Product Owner who had to represent the group by defending the skills selected with the other teams, and one Scrum Master who was in charge of writing down the main ideas resulting from the brainstorming session. 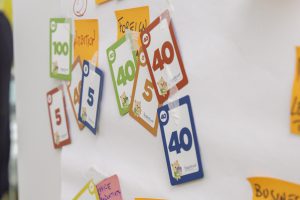 After the brainstorming, participants used the points cards in order to select the skills that they considered most important for an IT job. Those skills were then used by each Product Owner from each group in the bilateral interviews. And that’s when the fun started! 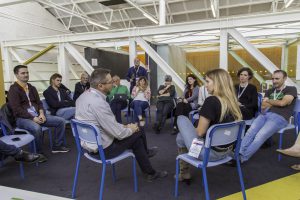 The bilateral interviews were supposed to replicate a job searching process. Each Product Owner had to defend the group’s ideas and they really tried to play the role! The aim of the interviews was to select the ultimate skills and to evaluate whether some skills were missing: security and privacy skills, for instance, were missing from the trainers’ offer. The main skills selected were office skills and soft skills.

After the interviews’ rounds a plenary session took place where all the participants discussed the result of such an engaging and amusing workshop.