Posted at 10:30h in News, Uncategorized by webmaster@telecentre-europe.org

On 9-10 March, 2017, 58 participants gathered in Brussels for the Telecentre Europe’s seventh General Assembly, followed by a more informal membership meeting. 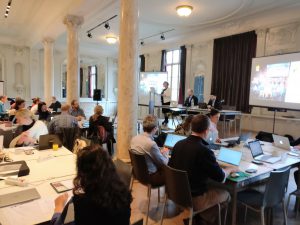 During the formal part, the representatives of 35 member organizations voted on approval of the 2016 Report and budget, as well as the Action plan and budget for 2017. The new Board was elected for the next 2 years (see more about it here); and the new network members were presented.

We are pleased to welcome eight new organisations that have joined the Telecentre Europe network during the last year: 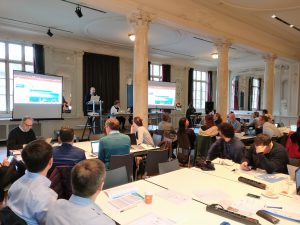 After the formal parts of the General Assembly, a more informal membership meeting was held, during which the delegates were updated on Telecentre Europe’s projects and programmes and had a chance to network, discuss certain topics, and share their opinions.

During the first session, delegates learned about the results of the annual members’ survey, got introduced to the strategy renewal and the rebranding plan. The rebranding plan was met with great enthusiasm, as, according to members, it reflects well the challenges of the times and the organisation’s role in digital empowerment and transformation. You will hear more about it in the coming months. 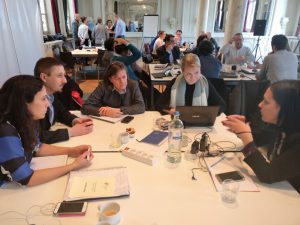 Other sessions included the presentations of the annual awards; next annual conference, which will be held in Barcelona in October 2017; new re-launched Study Visits programme for member organisations; and the overview of the Telecentre Europe’s flagship Get Online Week campaign, during which National Partners talked about the benefits of the campaign for their communities and organisations and shared their strategies and tips on creating partnerships and engaging users. 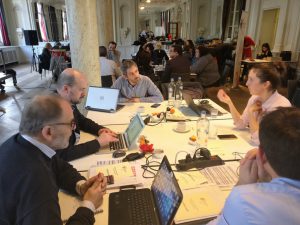 Delegates also had the opportunity to engage in thematic discussions with other members sharing similar interest in exploring or specializing in one of the topics: Employability, STEM awareness raising and training, Basic Digital Skills, Coding, and Digital Media Literacy. The topics were chosen based on the clustering survey conducted before the meeting. The purpose of the clustering is to provide better understanding of members’ expertise and hence allow more effective, tailored communication to members and targeted services.

Members were also invited to take part in an ongoing study on the impact of Internet and social media on youth participation that Telecentre Europe is conducting for the European Commission.

On the second day, the delegates took part in two workshops, each based on the collaboration of Telecentre Europe member organisations: CodeMob and Youth e-Perspectives (YeP). 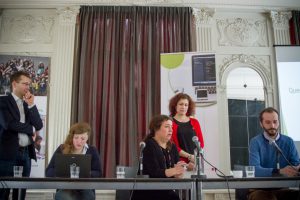 At the CodeMob validation workshop, the project partners presented the methodology and curricula for the 2 courses: on coding and on the effective use of mobile devices. The CodeMob project is aimed at improving the training capacity of telecentres by developing two courses and preparing e-facilitators who will further train end users in the four participating countries. The ultimate goal is with the training to enhance skills of unemployed youth and thus increase their employability. 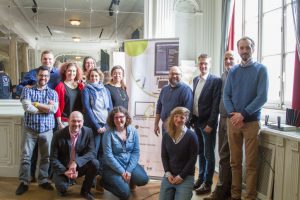 The session was moderated by Telecentre Europe and Technical University of Dortmund with the support of project partners. Interface3 (Belgium) and Telecentar (Croatia) presented the coding course; ComNet (Hungary) and El Teb (Spain) – the course on mobile devices. After the presentations, the methodology and the curriculum were discussed and validated by the participants. The project is not finished, and now the partners are preparing the Do It Yourself toolkit for organisations who would want to use these curricula in their language and context. As stands from the name, it will contain guidelines on how to localize the training curricula, present tips and tricks on promotion and attracting the users, so stay tuned. 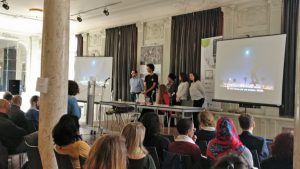 The other workshop was devoted to the YeP project, which targets young people and teaches them how to use digital media to address important societal issues, such as the refugee crisis and migration. The objective of the workshop was to disseminate the project’s main outputs: the “Find-Tell-Act” methodology and the Guidelines, designed for other organisations, which want to apply the methodology in their work with young people.

All four project partners played an active part in the workshop: Telecentre Europe moderated the session, MAKS vzw from Belgium explained the methodology and training,  El Teb from Spain presented the online platform and the blog, and Telecentar from Croatia facilitated the discussion. 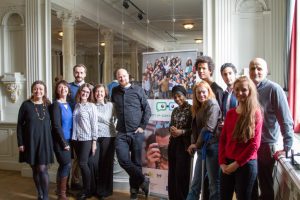 However, the main actors of the workshop were the young people from Spain and Belgium, who had taken part in the training and shared their experiences of the project explaining how the project enhanced their skills and changed their outlook on life in general and migrants in particular. They have presented their own and their peers’ moving digital stories of refugees and migrants, which were created as a result of the training and touched the hearts of the audience. It was a credible proof of the importance of such projects in fostering tolerance and empowering young people to be active citizens and to search for solutions.

Both workshops presented opportunities for questions from the audience, discussions on the presented methodologies, their benefits and challenges while deploying in other countries, and further dissemination efforts. All the details will be available on the projects’ websites.

See all photos from the event here.