Posted at 15:21h in News by Andrea Bedorin 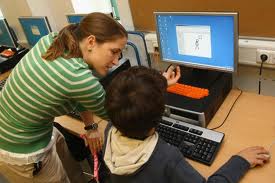 The lack of basic ICT skills in certain population groups and the need for affordable access in specific geographical areas are responsible in part for the digital exclusion of as many as 30% of Europeans. A new study commissioned by the JRC to Telecentre-Europe and the University of Washington titled “Mapping e-inclusion actors in EU27” has found that around 250.000 organisations in Europe may play a vital role in fighting digital exclusion and thus changing this trend for the better.

The study surveyed almost 3,000 respondent organisations, which constitute the first “European Union e-Inclusion map”. Public libraries, municipal and city offices, and government or NGO-run telecentres represent the bulk of e-Inclusion actors with some variations across the EU-27. Although these organisations have so far not received particular attention from policy makers, the study reveals that their role for achieving the goals of the Digital Agenda for Europe may be vital. In particular, the implementation of the Digital Agenda’s objective 2.6.1 (Digital Literacy and Skills for empowerment and emancipation) calls for multi-stakeholder partnerships, ICT training and certification outside formal education systems. E-inclusion organisations mapped in the study offer a starting point for partnerships in the area of Digital Literacy and Skills.

Aside from arriving at a plausible estimate of the size and distribution of e-inclusion   organisations (250.000 organisations), the study sheds light on the organisations’ profile, the services they provide and to which targets groups, how they operate and innovate, and how they can be classified (typology).

In terms of services, 80% of the organisations mapped in the study provide public access to computers and Internet and also digital literacy trainings for their communities. This is especially important when ICT is used to support social inclusion of groups at risk of exclusion- e.g. unemployed and digitally excluded citizens in their search of employment. Half of the organisations studied offer employment-related training such as online job seeking skills, application, and CV development. The majority of organisations go a step further, offering employment-related training, training on the use of social media and other collaborative software to promote peer-to-peer learning and content generation- skills that transform many of their users from consumers to producers of information.  All of these activities are at the heart of the Digital Agenda policy goals.

E-inclusion actors have also been identified as hub of innovation, in the provision of skills and certification, targeted employment and entrepreneurship services and capacity building for e-facilitators amongst others. Examples of innovation can be found in services such as targeted career guidance to long term unemployed  with a quick identification of profiles at risk of exclusion and the consequent offering of adapted trainings.

The results of the survey feed into a larger project – known as MIREIA – conducted by JRC and the Commissions’ Directorate General for Communications Networks, Content & Technology. MIREIA stands for “Measuring the Impact of e-Inclusion Actors on Digital Literacy, Skills and Inclusion goals of the Digital Agenda for Europe”.